We have another winner! 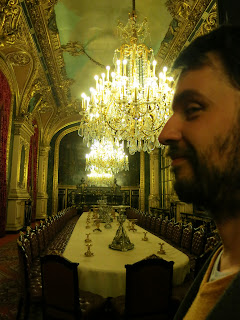 
Answer: the dining room of the Napoleon III apartments at the Louvre

This picture to the right was taken in the Louvre's Napoleon III apartments, which, not coincidentally, Napoleon III (nephew of Napoleon I) had fixed up.

It was a big surprise to Le Prof and La Potiche to find these rooms in the Louvre; despite a number of previous visits, we'd had no idea they were here. Maybe we were busy chasing after more important works such as l'Objet plat et circulaire.

In 1851, Louis-Napoléon Bonaparte, as he was known back then, was doing his stint as first titular president of the Republic of France, living at the Palais de l'Élysée, where the French presidents still live.  He invited the architect Louis Tullius Visconti to present some plans for linking the Louvre and Tuileries palaces and generally furbishing up the Louvre.  Later that same year, Louis-Napoléon pulled a coup d'état, and ascended the throne as Emperor Napoleon III--the last monarch of France.

That was when he gave Visconti the green light to go ahead with renovations.  But Visconti died of apoplexy and was replaced by Hector Martin Lefuel, who, among other things, pulled together the state apartments shown here between 1856 and 1861.  It is probably not a coincidence that Napoleon III wanted them done up in Louis XIV style.  To learn more about the building project, check out this totally fun article on Napoleon.org.  Because Napoleon.org is the kind of web site you need to know about.


After we'd made our eighteenth visit to the Louvre in five months, we were a little Louvred out, though we didn't want to admit it.  We broke things up a little by taking a promenade in a 136-acre postmodern garden, 136-acre postmodern gardens being the kind of thing they build here for kicks.  Plus a trip to Burgundy (thanks, Anna and Eileen!).  Refreshed and sunburnt, we returned for our nineteenth visit, including a second peek at the appartements (having realized that we'd forgotten to take more pictures for our contest), only to find that the Louvre crew had anticipated our mood and decided to SHAKE THINGS UP!!!!!

The Louvre had invited the artist Wim Delvoye to do an installation in the Objets d'art section of the museum, which includes the Napoleon III apartments.  None of the works identified here in the photo captions were present during our first trip through. Why, hello there, corkscrewed bacchantes and piggies!

This visit was like a scavenger hunt:  there were monumental works right out in the open, and little ones in casements hidden among the 19th-century bric-a-brac.  Big steel sculptures like twisted versions of marble sculptures in the collection, big cathedral-like sculptures of steel cut like lace, big "tapisdermied" pig sculptures, dainty porcelain things, and new stained glass windows installed in inconspicuous places.

Speaking of inconspicuous windows, on our way toward the Renaissance Objets d'art, we walked through a stairwell we'd traversed before, but with an eye, this time, for unexpected interventions. That was when we noticed François Morellet's L'Esprit d'escalier, one part of which you can see here.  In 2010, the Louvre invited Morellet to redo the windows in the Lefuel staircase, and he did, subtly shifting and skewing them.  They are a delight!

It's wonderful to be able to spend enough time in the Louvre to visit and revisit rooms and artworks enough times to get completely familiar with them.  It's also wonderful to get our perspective skewed and refreshed by the contemporary works, the performances, and the other exciting projects the Louvre crew puts together. 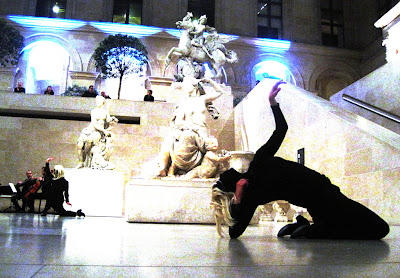 Our very first visits to the Louvre, back in February, coincided with the nighttime festival Amour à Mort that juxtaposed musicians, dancers, acrobats, and performance artists with works that inspired/provoked them.  We chased through the museum, night after night, in pursuit of a piano and operatic soprano heard in the Galerie Médicis, or a dude covering Bonnie Tyler while surrounded by Poussin's Les Quatre Saisons, or a scritchety-scratchety babble of vaudeville exhortations accompanying the acrobats leaping onto each other's shoulders in imitation of the sculptures in the Cour Puget, or the silent,

uncomfortable crowd watching a group of dancers doing really graceful but painful-looking things up and down the hard marble steps of the Cour Marly (interacting more with the architecture than with the sculptures) to the accompaniment of a string quartet.

Every night, as we exit through the courtyards, we hear cellists and countertenors busking, invisibly, under the arches.  And sometimes, we see evidence that other unauthorized individuals are hard at work, making their own little changes to the Louvre, as in the photo to the right.  It all reminds us to look at the old and familiar with a fresh eye, and makes it possible, when wanting to look freshly isn't quite enough to make it happen spontaneously.


It also makes us wistful (well, completely sick to our stomachs) to think of leaving, because it's not true that we can always come back in the future to finish up, as it were.  We will miss the Louvre's special exhibitions, rooms opening and closing, performances, temporary installations, and works coming in and out on loan.  Even such a big whale of an institution of the Louvre is always in flux.

It goes without saying that we're also in despair about everything we'll be missing at the dozens of other museums, galleries, and exhibition spaces we've enjoyed in Paris, the monuments and churches, and the parks and gardens.  We don't even dare think about the sixty-odd other museums and sights I put on our Must-See list but didn't even get to.


I like to think that we'll be going back to New York with sharpened faculties, to better appreciate our home city.  Art galleries of Manhattan and Brooklyn, get ready to see us every other week again.  Metropolitan Museum of Art, you better dust up the study wing.  Brooklyn Museum, you will have two visitors at your inexplicably deserted Friday night soirees.  Queens....we will learn something about your museums, for once.  Justin Waldstein, you're on our calendar for August.  And all you other art makers and art venues in New York, beware, because we are emboldened and desperate for more!

Contest #1: Winner:  Anne:  Le Parc des Buttes-Chaumont
Contest #2:  We are the winners, because we get to walk along it all the time:  La Promenade Plantée
Contest #3:  Winners:  Libya and Bridget:  le Musée des Arts et Métiers
Contest #4:  Winners:  Daniel and Stephanie:  Opéra Bastille
Posted by Alison at 4:24 PM