Well!  We never thought it would happen, but...a Gentle Reader has requested another contest! Thanks for reading, Bridget!


Some of you may have thought that Le Prof and La Potiche had eaten too much fromage and untimely expired.  Mais non!  We were busy planning and packing, then running around the city with friends, and finally departing with said friends for central France, the Dordogne and Lot river valleys, for a vacation.  Another vacation away from Paris!  We will show you pictures, once we've finished uploading all 3,000 of them, and sufficiently detoxed on steamed vegetables to be able to think of blog-length things to say about the Wonders of Périgord et Haut Quercy.  So. 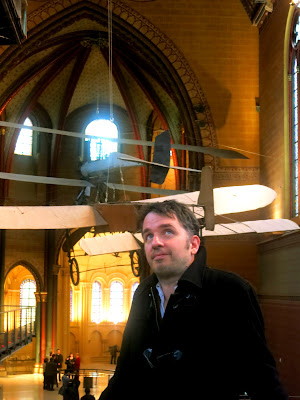 
Clue #2:  WYSIWYG.  If you just describe what you're seeing in a web search, you'll probably find the answer on the first page of hits.  Because that is the kind of nice people we are, and that's the kind of nice clue we write.  Have at it!

Answer:  the former priory of Saint-Martin-des-Champs, now part of le Musée des Arts et Métiers (Museum of Arts and Crafts/Trades)
Winner:  Blibby, by a nose!  Blibby, who are you?  Are you somebody we know, posting under a Blogger name?  We had two correct answers this week, but Winnerdom goes to the first!  Thanks to Bridget, though, for providing me with a source to plagiarize for this blog post! 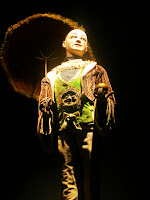 The Conservatoire National des Arts et Métiers was founded in 1794 and its museum collection of machines, tools, and documents related to science and industry established in the Priory in 1802.  Under normal circumstances, Le Prof would've been all fired-up about the Priory, built around 1130-1140.  Under normal circumstances, La Potiche would have been all fired-up about Foucault's pendulum, though she has to admit that she remembers nothing about the Eco novel, which she read in 1997, except the resemblance of one scene to a scene in Northanger Abbey, and a feeling of dismay about her complete inability to understand HOW the pendulum demonstrates the rotation of the earth.  She stared and stared at the pendulum and the placard and understood NOTHING.

But it wasn't normal circumstances!  We were touring Paris with friends who were all fired-up about their discovery that the Musée hosts a demonstration of old automata every Wednesday.  Suddenly we, too, were all fired-up about automata, because we want to be like our friends, and we also want to be like the French.  The French have been fired-up about automata since Descartes and Jacques Offenbach.  There is a Musée des Automates in Paris--just automates, all the time!--that we'd visited the day before.  Le Prof had also just come back from a robots conference at Penn State; as a result, he has been going about saying, "I like robots," at every opportunity.  LIKE A ROBOT!  As for La Potiche, when she was little, she had not one, but two clown dolls whose heads spun around, and sometimes she still cries a little about missing Clownie and Clownie.

So we snagged 4 of the 40 available tickets and sat in on the demo and a very rapid, engaging, and somewhat technical 40-minute lecture, along with about twenty extremely quiet and interested children, ranging in age from about 6 to 11, and their attendant grownups.  Only one of them (the children, that is) spoke out of turn, but only because she was excited about the show.  The children were so attentive and intellectually engaged that we would suspect they were automata themselves, programmed to demonstrate the superiority of French yuppie parenting methods, except that none of them had monkey heads or dogs popping out of boxes in their groins. 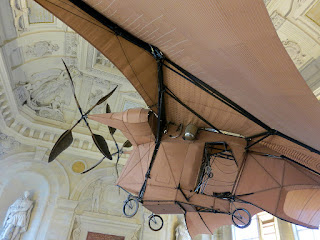 The demo des automates took a lot out of us.  Or maybe it was the long march in the rain earlier that day to buy a gazillion euros' worth of sweetmeats (gentle readers, I bring bad news:  Pruneski has been discontinued.  Or something.  We couldn't quite grasp the blitz of français that thundered upon our heads when we inquired after the greatest candy in the world, except that the new version, with a slightly bitter raw walnut in it and no date, is nowhere near as good).  Or the fascinating visit to the Musée de la Vie Romantique for a show on 19th century theater, and out to Belleville for a grand couscous, and then back to Arts et Métiers to be BEWILDERED by Foucault's pendulum. 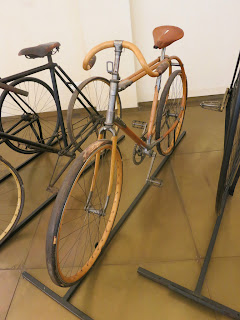 At any rate, after marveling at the airplane in the apse, and marveling at the steam-powered bat plane (above.  Really!  Avion III of Clément Ader, called "Chauve-souris," or "Bat"), and the History of Bicycles bike rack with the wooden bike in it, and the human-sized early model for the Statue of Liberty, we each downed a coffee, and two of us slunk home to do laundry and get ready for the (unbeknownst to us) seven-hour journey to the Dordogne the next day.  But the awesome things we saw that day have convinced us that a second visit to the museum is in order.  It goes without saying that somebody who named both her clown dolls Clownie is never going to understand the pendulum, but maybe she can catch a breeze in the Chauve-souris!

Thanks to our participants!  We'll have another contest ready for you, like, tomorrow or Thursday or something, maybe.
Contest #3:  Winner, Blibby.
Contest #1: Winner, Anne. Link to the answer!
Posted by Alison at 9:16 PM