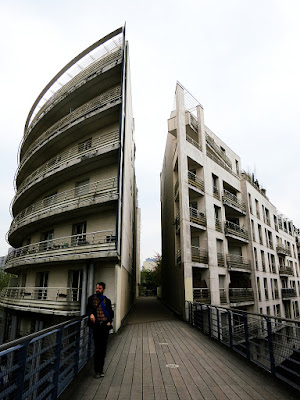 Clue #1: He's just strolled along a road strongly associated, oddly enough, with the Dictionnaire historique des rues de Paris. But what intersection is he overlooking now? And how did he get there?

Clue #2: Our path has led us along the decommissioned Vincennes railway line....

Here's Karl, on the Promenade Plantée, or Coulée Verte, at the intersection of Rue Jacques Hillairet (Hillairet was author of the Dictionnaire historique des rues de Paris), Rue Montgallet, and Rue de Charenton. We're just past the Jardin de Reuilly, walking westward along the Promenade.

The Promenade Plantée is an elevated park in the 12th arrondissement, built on the abandoned Vincennes railway line and opened in 1993. It was the High Line before there was a High Line! And I know that recently, some of you have looked online at an image comparing the two parks from Vahram Muratyan's book, Paris vs. New York: A Tally of Two Cities, because you sent me links to it! The Promenade includes 4.7 km of pedestrian and bike paths, running from the Bois de Vincennes under the Périphérique beltway, over the Viaduc des Arts to Bastille. It is a gorgeous park, and a gorgeous use of what had been decaying urban industrial space, and a wonderful peek into the backs of outer-arrondissement Parisians' apartments. 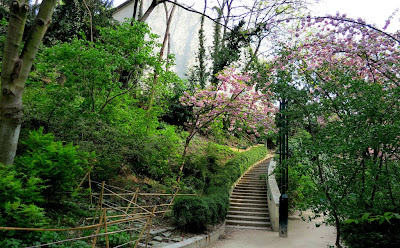 We took the métro out to Porte Dorée, then Vélibed through this garden here.

Click on any of the pictures for a closer look.

Then we rode through tunnels.
Wheeeeeeee! The next tunnel contained a prehistoric-looking grotto. A French park is not a French park without a grotto. Prehistoric is also fashionable.

Shortly thereafter, we had to abandon our bikes, because the bike lane ended. Clearly, the park planners knew we'd be so staggered by the prehistoric grotto that we'd no longer be able to balance on wheels. 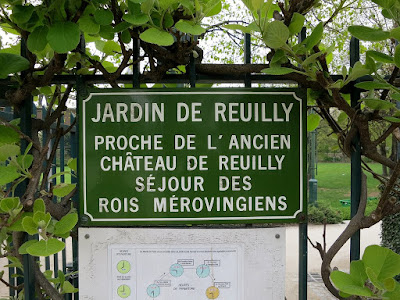 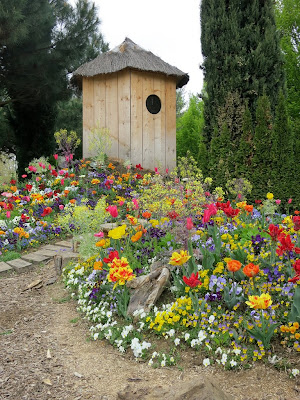 But this was the only sight that even began to resemble a Merovingian castle. They say that people were smaller in those days. But who are "they," anyway?

We approached, and passed through, the Mystery spot. Then we descended to visit the Marché Aligré, the first street market we've visited where the vendors were loudly hawking their wares (strawberries and fish were the big items) in at least two different languages. We bought merguez-frites (which are merguez and french fries stuffed into a baguette) and went back up through a bamboo garden to sit on the Promenade and eat our lunch.

Here, I am marveling over the fact that this thing is nearly three miles long, and absolutely gorgeous, and nobody ever told me on any of my previous Paris visits that I ought to see it!

So. Are the clues not helpful enough? Do we need to be more specific? Or is it just more fun to sit back and wait for the pictures to roll out?