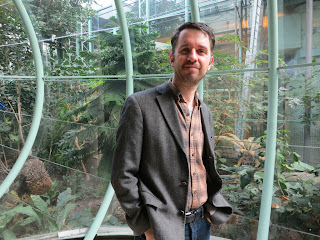 We have a grand prize winner!

Answer: just outside the greenhouses at the Forum des Halles

Winner:  Anne! With her two correct answers, Anne wins the prize!  Hopefully, it won't melt on its way from Texas.

If you spend time in Paris, at some point, you're likely to pass through the Forum des Halles.  Or Les Halles métro stop.  Or Châtelet-Les Halles RER stop.  Or Châtelet métro stop.  Or all four of these destinations. Who knows?  Unless you are a transit enthusiast,you probably will not be able to tell the difference between any of these destinations, because they form a gigantic underground network-mall without any clear demarcations from one point to the next.  Châtelet-Les Halles, taken as a whole, was once, and may still be (my quick search doesn't yield a definitive answer) the largest subway station in the world.

On a soppy morning, when you want to go somewhere but it's too nasty outside to bike or walk, and it's after rush hour so the worst of the traffic is past, and you've got no luggage to carry, and you've had a good night's sleep and a really nice espresso shot, Châtelet-Les Halles can be kind of cool from the urban planning angle.  You think, wow, if I had to intersect eight different underground trains in a commercially dense zone whose foundations seethe with a crosshatch of industrial lines and tubes and two thousand-year-old archaeological remains, could I do any better?  (The answer, unless you are an urban planner, is No.)  And so you plunge into the station with a feeling of adventure (will I find my way out by lunch?) overlaid with a doom-y feeling of This Is The Best They Could Do, going in search of your train with the minimum inconvenience of, say, walking through a quarter mile of narrow stinky steeply graded uphill tunnels joined by two football-field-length people movers, twelve flights of stairs, three ticket stop-points (even inside the station, you have to keep producing your ticket from one nexus to the next), and two escalators, with dim lighting (atmosphere!) and a clean, elegant lack of signage (minimalism!).  Imagine the Daedalian labyrinth, with no Minotaur and no ball of string, but a lot of fast food joints, urine, and 750,000 travelers a day.  (Who can blame us for taking a pee?  Do any of us have any hope of getting out?)


Châtelet-Les Halles is as remarkable for its banality as for its inscrutability and complexity.  As is the Forum des Halles, the bleak, piss-smelling mall popular among kids from the banlieues.  The mall is like other malls, except it contains a vinyl library, a swimming pool, and the greenhouse, which is nice in and of itself but contextually bizarre:  it's really cool-looking, and has nothing to do with the rest of the mall, and, most significantly, you can't get in.  Before it was a labyrinth, Châtelet was a morgue.  And a prison.  And a fortress.  And before the Forum des Halles was a reviled architectural abomination of a mall, it was a reviled construction site and hole in the ground (le Trou des Halles), and before that, the central Halles, the gut/belly/stomach of Paris (Zola), the glass-covered wholesale food market whose last days were captured by Robert Doisneau in a series of glorious, heart-rending photographs we saw at Hôtel de Ville.  That expo was, for better or for worse, mounted in conversation with the current construction project at Les Halles, which, by 2016, is intended to transform the bleak, piss-smelling mall popular with kids from the banlieues into an airy, light-filled ritzy mall topped with a leafy park, with yoga studios and recording studios and high-end boutiques.


The obvious question is, what about the kids from the banlieues?  Is the new mall intended to displace and disrupt their community space, to "reclaim" it for "Parisians," whatever that's supposed to mean?  Or is it an attempt to do better by the kids, to give them a community space worth having, with a really gorgeous greenspace instead of consumerism and fast food?  And even if the intention is unreservedly the latter (which, of course, we doubt), whose right is it to determine what attributes (yoga?) make a community space worth having?  (Because, of course, my calling the mall "bleak" betrays my own prejudices; it could also, perhaps, be called vital, fun, familiar, heartening, solidarity-making, or any number of terms that I'd have no cognizance of, because it's not my community space.)  And even if a good answer to that question could be decided, who's to say that, even with the best intentions, the disruption and displacement won't still occur?  Even if barriers of cost, culture, and class weren't raised by the nature of the new project, the four years of projected construction will do their own share of disruption.  The history of gentrification says Uh-uh.

And so, we leave Paris, and our Paris blog, with lots of unresolved questions, and an impending feeling of doom, and return to the U.S., where, in our wanderings through three time zones, we've been experiencing all kinds of different culture shocks (including the Glenn Beck books in the checkout line at the supermarket in San Antonio) (also, the supermarket itself).  (Which is, of course, not to say that right-wing bullshit doesn't happen in Paris.  But this is our right-wing bullshit.)  But to round things out with a kind of narrative closure, which is what passes for optimism around here, we will eventually return to Paris to report on the ongoing progress of the Les Halles project.  And to get lost in Châtelet.  And to broaden our experience with French indoor gardening techniques.  And, maybe, to actually learn some French.  We'll be going back to Paris, OH HELLS YES.  But in the meantime, we've got more of Seattle to see, and Portland, and then home.

How ya gonna keep 'em down on the farm
After they've seen Paris?

There's an answer to that, right there in the song.  You can't keep them down on the farm, oh no, oh no.  But,

How ya gonna keep 'em away from Broadway?
Jazzin' around,
And painting the town?

You can set them loose in New York, instead.  So that's where we'll be, jazzin' around and painting the town.

Thanks for the travel recommendations, the awesome comments, the visits, and just following along with us!  We're Le Prof and La Potiche, over and out.  Or, wait, not.  Because Le Prof says that he might, "possibly," post a real last post of his own.  So, stay tuned, maybe.

Contest #2:  We are the winners, because we got to walk along it all the time:  La Promenade Plantée